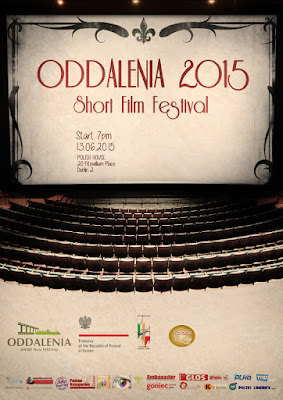 There will be a Short Film Festival Gala entitled ODDALENIA 2015 in the Polish House, 20 Fitzwilliam Place, Dublin 2 on Saturday 13 June 2015 at 7pm. The Polish Social and Cultural Association in Dublin is the organizer of this Festival.

19 films were submitted to the Festival and we have chosen 8 productions which in our opinion are the best and most interesting. Their creators are from different parts of the world.

During the festival there will be an exhibition of photography prepared by the POZYTYWni Group. This group is made up of four photography enthusiasts who want to pass on their knowledge and skills to others. Autors: Małgorzata Pióro, Grażyna Sobik, Łukasz Pedlowski, Bartłomiej Pilarczyk

The project Short Film Festival ODDALENIA 2015 is co-financed by The Embassy of the Republic of Poland www.dublin.msz.gov.pl

The expected duration of films is 2 hour.

As places are limited, we ask guests to be punctual. The films to be presented are adults only.

Members of the jury of the Festival ODDALENIA 2015 (full list):

Collaborators:
The winning film of the Festival will be shown during the Richard Harris Film Festival in October 2015 in Limerick.


The designer of the Grand Prix Statuette :

During the Festival Gala music will be provided by IRIS, a band composed of:

As places are limited, we ask guests to be punctual. The films to be presented are adults only.

A big thank you to all who helped in the preparation of the Short Film Festival ODDALENIA 2015.