The International Short Film Festival ODDALENIA has become firmly established in the cultural calendar of Dublin. For the past ten years, the ‘Polish House’ located at 20 Fitzwilliam Place, Dublin 2, has been a place where one can see the latest short films from different parts of the world. The final gala of the Festival will begin on Saturday June 16th at 20.00
The International Short Film Festival ODDALENIA is the work of several people who have been organising this event with growing enthusiasm for many years. For the most part they are members of the Board of The Polish Social and Cultural Association in Dublin and people who empathize with both the film genre and the Polish House. The list would be long, but first, it is worth mentioning the names of the Organizing Commitee members. These include Barbara Bugalska, Aneta Dina Keder, Justyna Zidar, Gabriel Gargus and Tomasz Rydzek. Their creative energy and enthusiasm results in the festival being run every year with ever greater results. The initial creator and now coordinator of the project is Samanta Stochla.
The festival has two main goals. The first one is to promote Polish filmmakers and Polish film productions, in particular short film productions in the English-speaking environment. The second and much more important goal is to integrate the film environment regardless of state borders. This year we have received films from such countries as India, USA, Spain, Ireland, France, Poland and Germany. The audience will see 10 out of 21 submitted productions.
During the Final Gala of ISSF ODDALENIA 2018 there will be almost a two-hour screening of films, refreshments and a piano concert organised by Alastair Boles. On the evening two main prizes will be awarded: the Grand Prix of the Festival for the best film and the Audience Award. The jury, chaired by Eamonn James Norris, consists of international members. The Grand Prix statuette is an original creation designed and made by Samanta Stochla.
In addition, the International Short Film Festival ODDALENIA is run in conjunction with other festivals in Ireland. Films awarded prizes at our festival will also be screened at the Richard Harris International Film Festival in Limerick.
The project is also financed with funds from the Polish Ministry of Foreign Affairs and this year it is part of the PolskaÉire Festival. 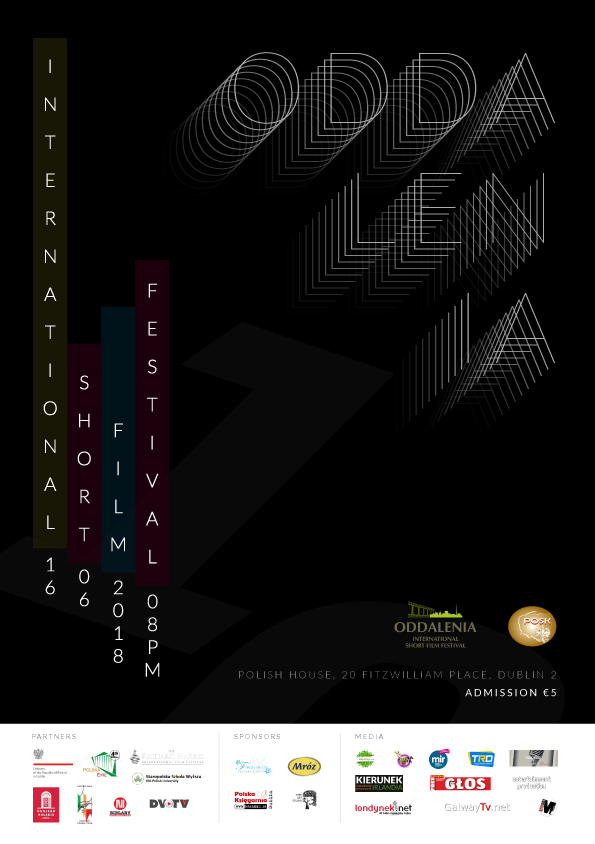